You are here: Home / Isfahan

Isfahan, Half of the World

The floating enchantment in the atmosphere of Isfahan has forced the people all around Iran to make the same comment as they hear its name: “Isfahan, Nesf-e Jahan”. This identical sentence indicates that visiting the existing splendor in Isfahan is as joyous as visiting half of the wonders of the world. Isfahan is one of the most magnificent cities in Iran that has a lot to offer: from splendid palaces, tree-lined boulevards like Chaharbagh, and bedazzling bridges with sumptuous architecture to the grand historical square of Naqsh-e Jahan (Imam square). The city’s reflection of lights behind the Si-o-se-pol Bridge is just beyond gorgeous. The breathtaking architecture and cultural treasures lying in the masterpieces in this stunning city has turned it into one of the most visited destinations in Iran among both local and foreign tourists. Moreover, Isfahan is now among those cities where art lovers crave for, somewhere you can enjoy the aesthetic patterns in contemporary arts, ancient buildings, and nature itself.

Located in the center of Iran, Isfahan has a lot of appealing sites and is reputed as the center of traditional culture in Iran. Visiting Isfahan is not only a journey in the history and culture of Iran in Safavid Era, but it’s a pleasure to find it as a gallery of the most appealing attractions presenting you with a unique experience in which you can touch the spirit of universal art. The combination of striking architecture with Islamic culture alongside the pleasing sound of the Zayande-rud river mixed with distant chants of young street musicians has made this experience more valuable. 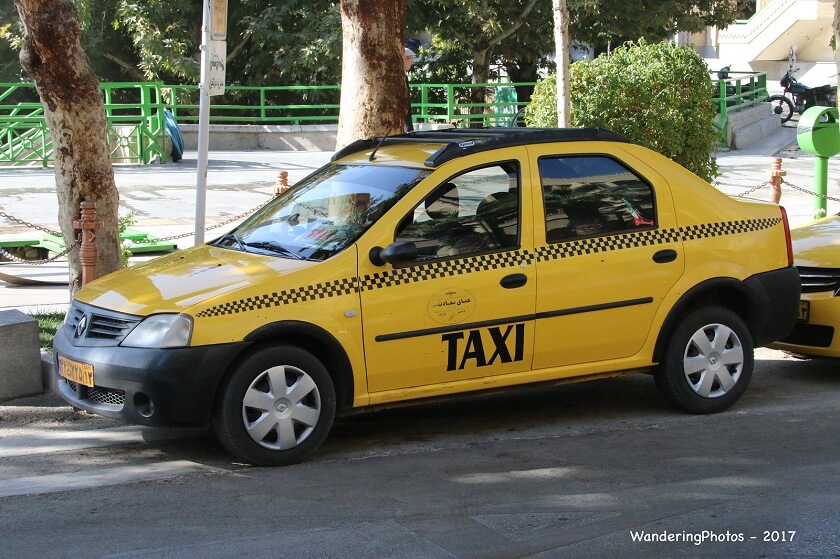 The underground operating train, besides the BRT buses, has made transportation very easy in this organized city. The subway runs precisely at the heart of the town and takes you from Kaveh Terminal to the recreational site of Mount Soffeh and crosses some top attractions such as Si-o-se-pol Bridge. Ordinary buses run like veins all over the city and taxis go for all attractions from different places. Except for that, cell phone applications like Tap30 and Snapp are giving services to the citizens and visitors at lower prices compared to taxis.

How to Reach Isfahan

You can come to the city of music and culture by car, bus, train, and airplane.

Train: The ease and comfort provided by the trains is a reason why trains are more prevalent among people. So, if you like to come to Isfahan by train, you should know that there’s a train from Tehran to Isfahan every other day.

Plane: The best, easiest, and fastest way to come to Isfahan is by airplane. Shahid Beheshti airport is one of the international airports in Iran in which you can get a Visa on Arrival in it. You can either come to Iran and straight to Isfahan, or fly from cities like Tehran, Mashhad, Yazd, Shiraz, Rasht, Tabriz, and Abadan to this glorious city. 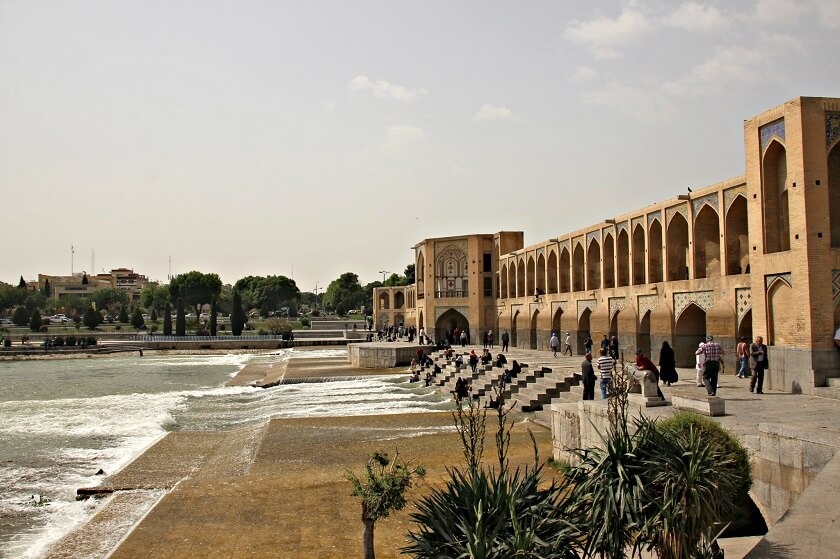 The weather and temperature vary at different times of the year in Isfahan. The climate is moderate and pleasant in early spring and early autumn, and the best time to visit Iran regarding the probable ideal weather is from April to June or from August to October. Isfahan is usually most busy with tourists during June, July, and January.

Things to Take Home from Isfahan

Walking between the rows in bazaars around the great square of Naqsh-e Jahan, you’ll get to see a lot of decorative handicrafts to take home with yourself as memorials of a great journey to Isfahan or souvenirs for friends or family members. The colorful stores full of works of etching on metal (Ghalam-Zani), tapestry on silver (Malile Kari), tile work (Kashi Kari), printing on fabric (Qalam Kari), inlaid work (Khatam-Kari), and enamel work (Mina-Kari) will tempt you to spend almost all your money. There are also lots of delicious goodies specific to Isfahan, like Sohan, Poolaki, and Gaz. Other than all the mentioned things, don’t forget to keep a journal of what you feel and experience since it’s the most precious thing to take home with yourself. 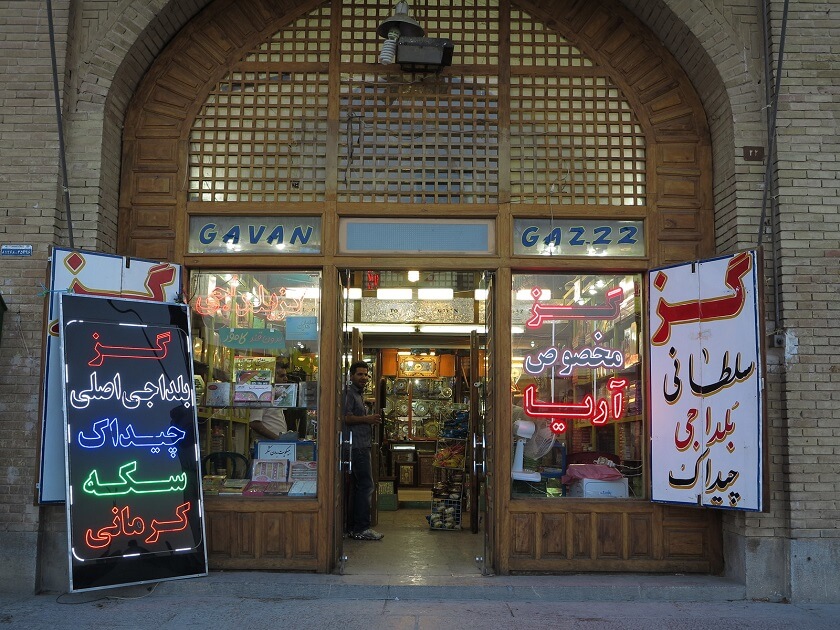 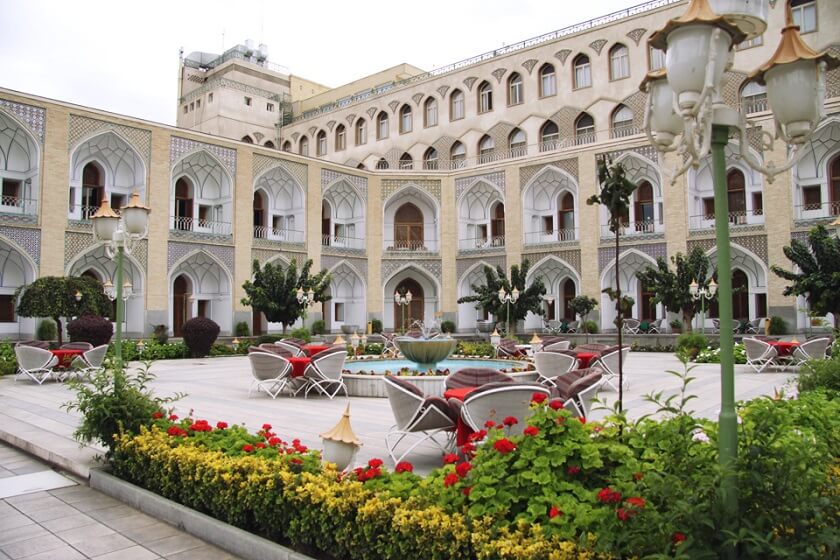 Being the host to a lot of local and foreign tourists, Isfahan has a lot of perfectly equipped hotels, from those most modern ones to traditional cute hostels.

The five-star Kowsar Hotel and The four-star Safir Hotel and Parsian Ali-Qapu Hotel are from the most luxurious hotels of Isfahan, providing a friendly and satisfying atmosphere. The modern Zohreh Hotel of Isfahan and Isfahan Tourist Hotel, each with three stars, are among the hotels with the best access to the historical attractions of this city since they’re located at the heart of the town.

On the other hand, there are lots of hotels with traditional architecture or historical structures in Isfahan withholding a tranquil and pleasant environment for their guests like Setareh Hotel, Abbasi Hotel, Isfahan Traditional Hotel, Sunrise Traditional Hotel which is built with Qajar architectural standards, Koohpa Caravansary Hotel, and Malek Hotel. Some of these traditional hotels have courtyards with blue ornamental pools in the middle of them that are surrounded by lots of red and pink flowers.