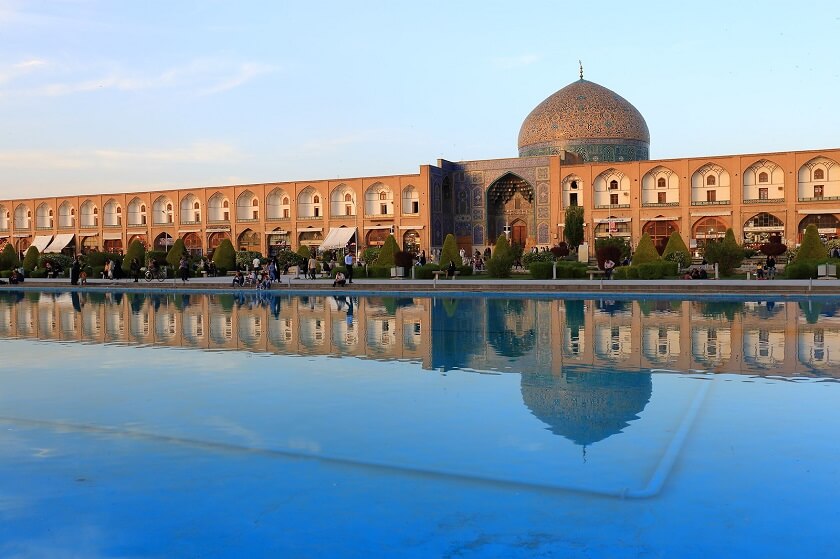 Situated on the eastern side of Naqsh-e Jahan Square, Sheikh Lotfollah Mosque embosoms the most beautiful and stunning types of design. Delicate calligraphy mixed with intricate tiling and miniatures lying on the interior walls of this beautiful mosque has turned the place to one of the inspiring places in Isfahan. This mosque, with its creamy tiles that change its color to pink throughout the day, was built by the order of Shah Abbas I and designed to function as the private royal mosque. Since Ali Qapu palace was a residence to the king and his family, he wished to have his own smaller mosque on the square as well. That’s actually why this mosque has no minarets and the king named it after his father-in-law who was a scientist and wanted to honor him. The king didn’t want the public to see him whenever he needs to go to the mosque, so he had the architect to dig a tunnel under the ground stretching from Ali Qapu Palace to the Sheikh Lotfollah Mosque and this tunnel has been an interesting fact about this mosque through centuries.

Sheikh Baha’i and Mohammad Reza Esfahani were the architects who used their skills to put all that magic into this place. The khaki background of the dome highlights the turquoise color of the picturesque arabesques on its surface and aims at the ayes of those people who are chattering in the middle of Naqsh-e Jahan Square. The inner side of the dome is even more charming with the intricate patterns of peacock tails on which the rays of light dance while coming in through the windows. There are 16 latticed windows all around letting the light in and making this masterful design of the interior hall even more adorable. Such grandeur and sacredness amaze everyone. You might want to spend hours to perceive all the beauty hidden behind the interlacing pattern and writings on the walls, and finally, find peace in the silence of the mosque.