Reasons Why You Should Visit Iran in 2022

You are here: Home / Iran Tourism News / Reasons Why You Should Visit Iran in 2022

Reasons Why You Should Visit Iran in 2022

Iran is one of those countries that is definitely worth visiting. People who live here are so hospitable and welcoming, and they will never let you down. I’m sure if you come to Iran, you will have lots of unforgettable memories because there are so many things here that you would definitely be fascinated by.

Today we are going to stroll through some facts about Iran’s tourism industry. Stay with us! 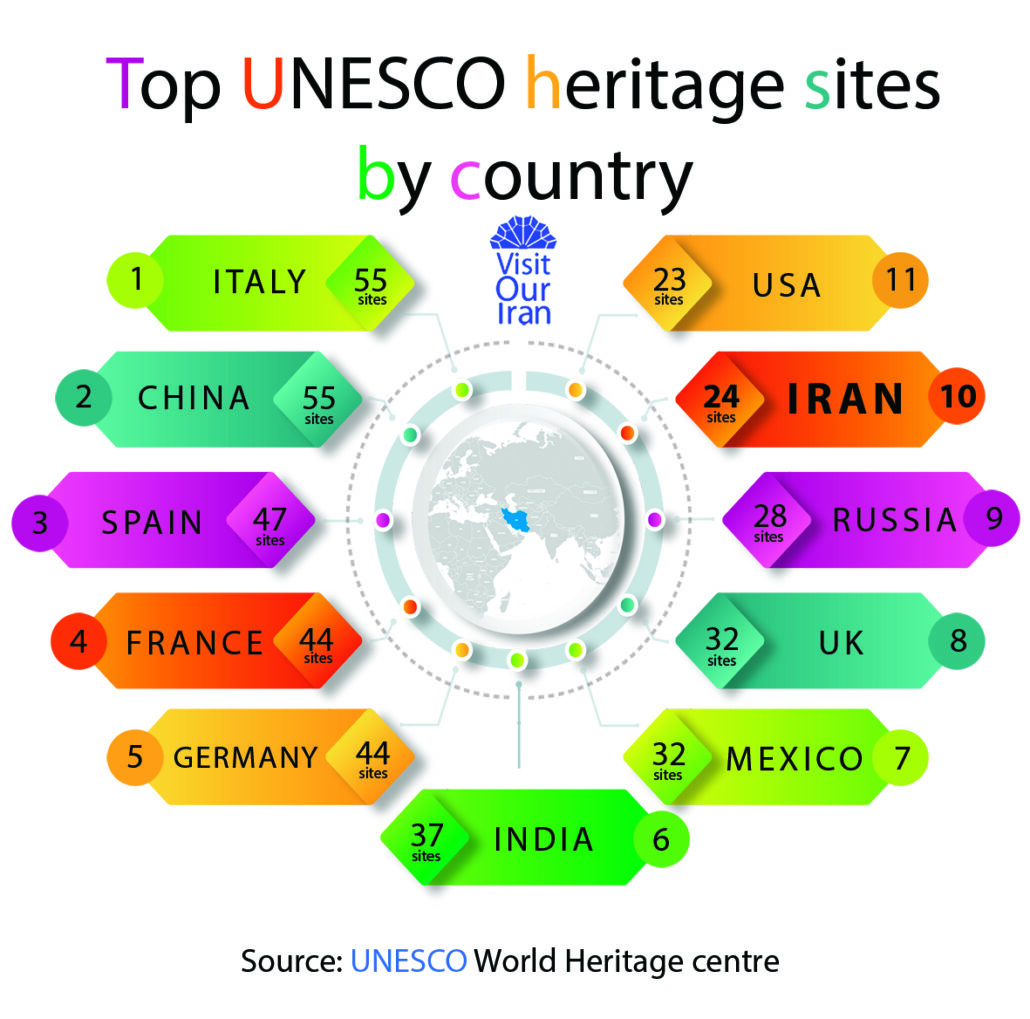 This graph illustrates the number of UNESCO heritage sites in countries of the world. According to the graph, it indicates the top 11 countries, which Iran is located in the 10th rank. Even one of the most touristic countries as the USA is placed after Iran in this case. As demonstrated, Italy is the first country with 55 sites in it, which is two times more than Iran’s sites. 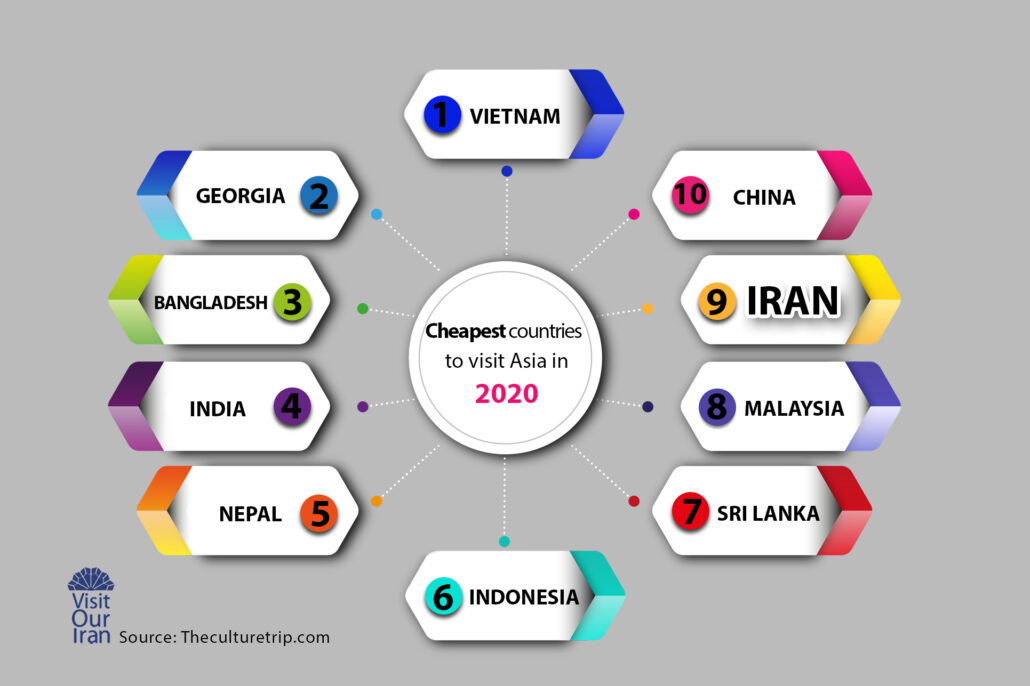 As can be observed, the cheapest countries to visit in Asia in 2020 are recorded by The Culture Trip. Iran also is placed as the 9th country in which you can enjoy traveling and spending your money on it. In conclusion, because of Iran’s currency, visiting this country can have lots of benefits for the tourists. Do not miss it! 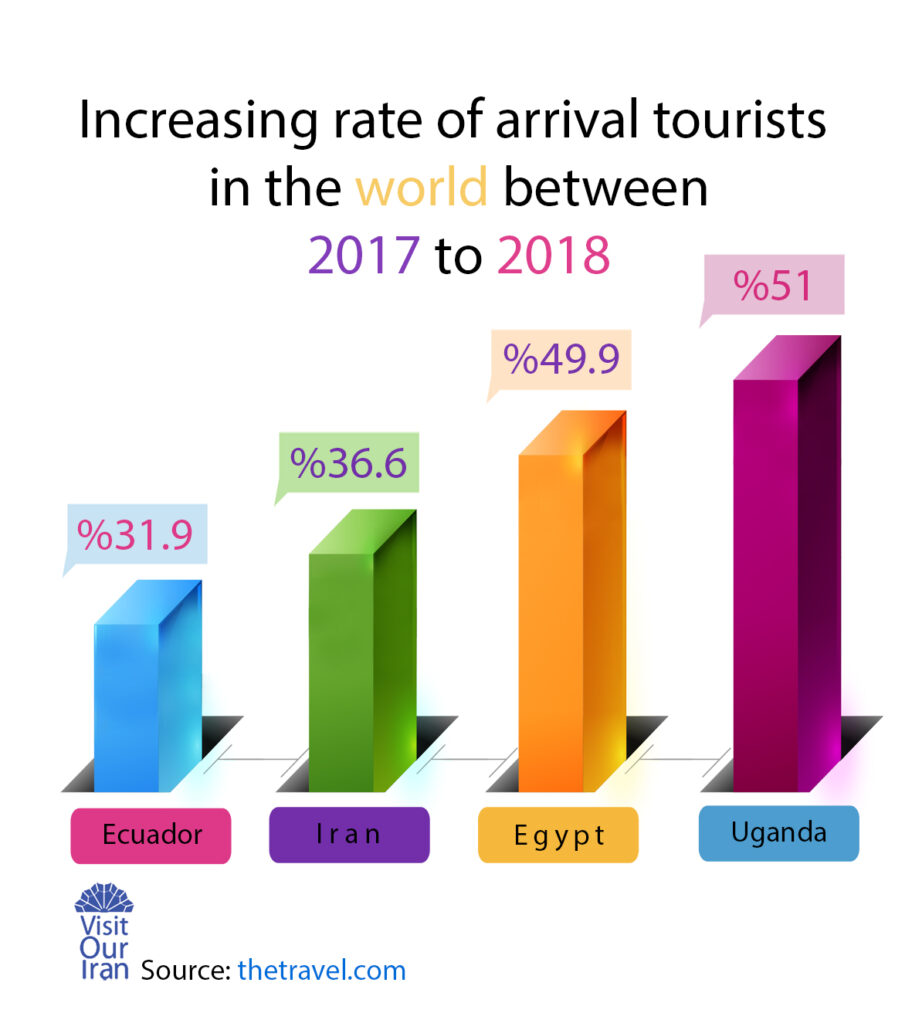 In this picture, you can vividly see the increasing rate of tourists all over the world between 2017 to 2018. As can be seen, there was a marked improvement with the number of visitors surging %36.6. As you see, Iran is placed in the third rate in terms of the growing number of absorbing foreign tourists to the country between 195 countries in the world. The percentage of the increasing number of tourists between 2017 to 2018 is shown in the picture. We also hope to reach the first-rate and break the record in the following years. 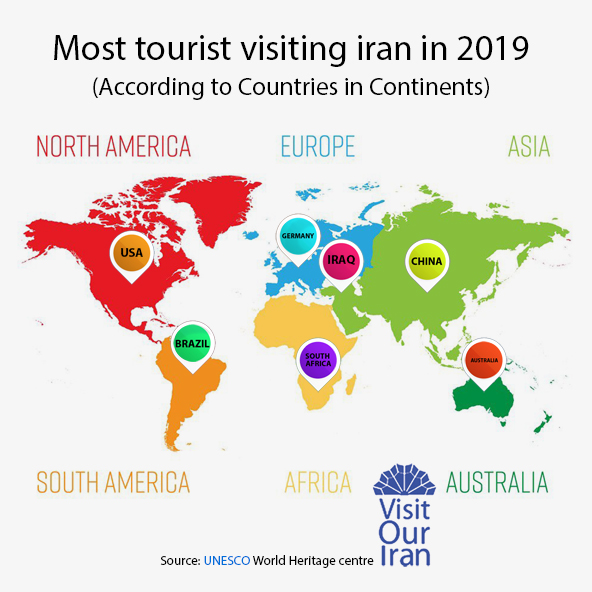 As is evident, most tourists who have traveled to Iran in 2019 are shown in this picture. Apparently, a maximum number of these people in Asia were from China; in the middle east, were from Iraq; in Oceania from Australia; in Africa, from South Africa; in North America, from the USA; in Europe, from Germany; and in South America, from Brazil. These countries had the most travelers to Iran in 2019. 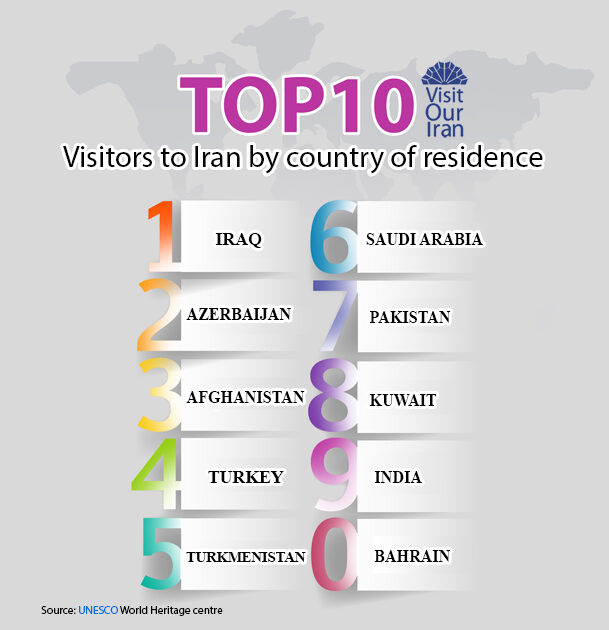 This picture indicates the statistics of 10 countries whose people traveled to Iran in 2019. As demonstrated, the first country in which we absorbed its people was Iraq, the second one was Azerbaijan, and the third also was Afghanistan. Overall, the graph shows most of these visitors were from neighboring countries. In the following picture, you can also see the statistics on the number of tourists from continents. 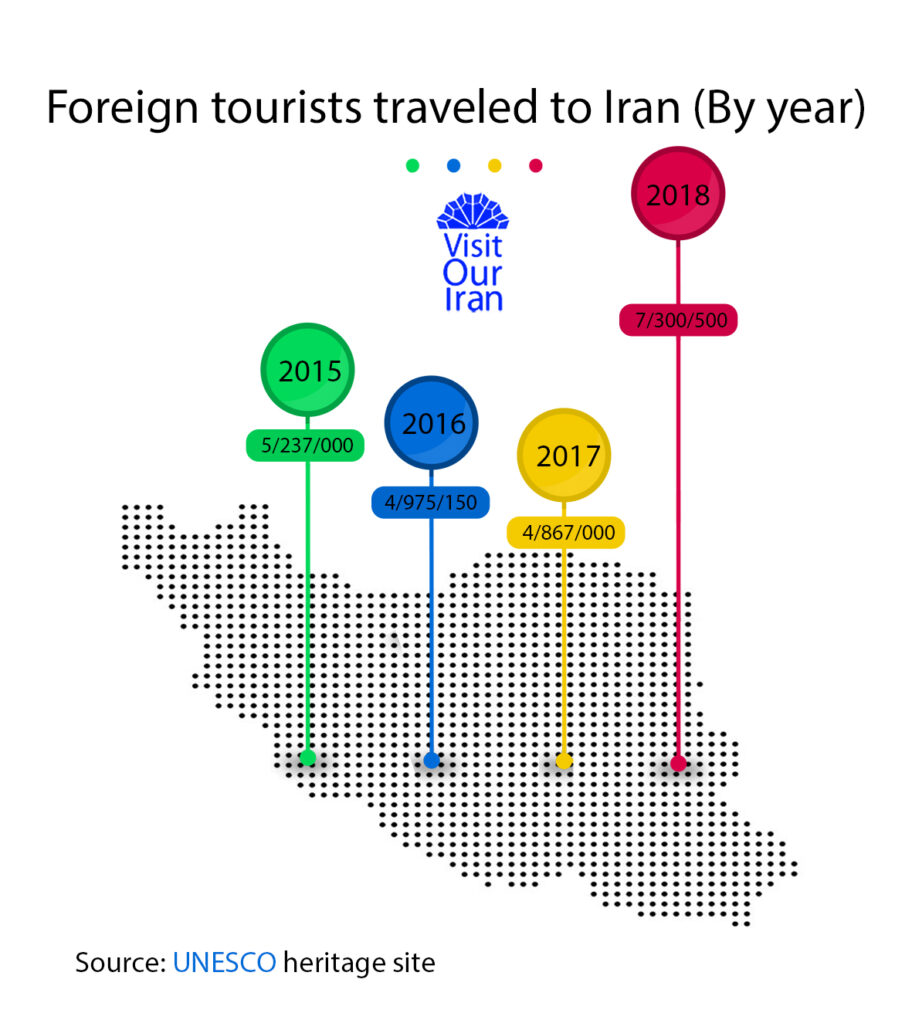 As it is evident in this picture, you can see the number of tourists who have traveled to Iran from 2015 to 2018. This number decreased gradually between 2015 to 2017, but during the last year, the trend was obviously upwards and the number increased to 7300500 in 2018, nearly 50 percent increase in number of incoming tourists. Of course, some factors contributed to this matter, such as a decrease in the value of Iran’s currency which has made traveling to Iran much cheaper than before, a free visa for traveling to Iran by the government, and so forth. These reasons have contributed to the increase in the number of tourists.

United Nations World Tourism Organization (UNWTO) has announced that Iran’s share of global tourist arrivals from the entire world tourist industry has shot up dramatically. It has been 2.1 percent between 2017 to 2018. Iran tourist arrivals have experienced a constant increase after easing the policies to travel Iran.

The Rose Water Festival; a Perfect One Day Experience of Art and Culture