You are here: Home1 / Editor's Choice2 / Charshanbeh Soori; a Preparation for Nowruz 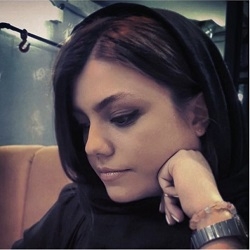 Kimia Raghebi
Being exposed to the brilliant Iranian tradition, historical monuments, and artistic artifacts throughout my life has always thrilled me. Traces of such joyful fascination have become more tangible in me ever since I chose literature and creative writing as my profession... So here I am; traveling, experiencing, enjoying, and jotting down every bit of them all for you to sense its magical wonder through my lens! 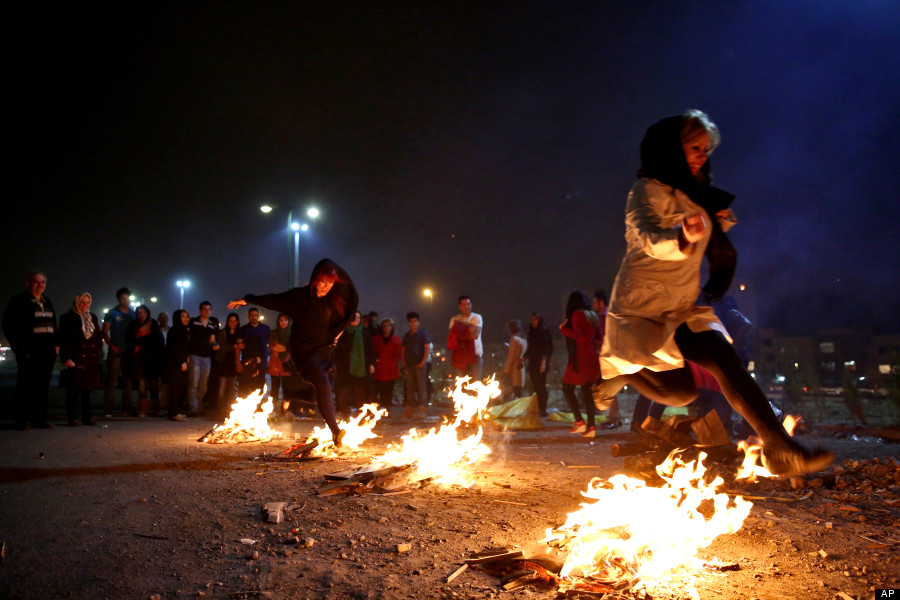 Chaharshanbeh Soori is the first ceremony Iranians hold for welcoming the New Year and getting ready for Nowruz. The last Wednesday of the last month of the year according to the Persian calendar is called Charshanbeh Soori. The preparation for Charshanbeh Soori starts a day before, and on the night of the last Wednesday of the year, friends and family members and neighbors would gather together outside their homes, set fire to bushes, firewood, dead grass and stuff like that and arrange them in a line of 3, 5 or 7 bushes.

Charshanbeh Soori is a traditional ceremony targeting both physical and mental health, welcoming the New Year seeing it as a chance of starting over. Many rituals are held during Charshanbeh Soori which I am going to tell you more about them.

Want to learn more about the Iranian Culture and its beautiful quirks? Dig Deep into the Enriched Culture of Iran. Check out all of our In-depth Cultural Tours.

Fire to Light up the Darkness of the Night, the Heart and the Soul 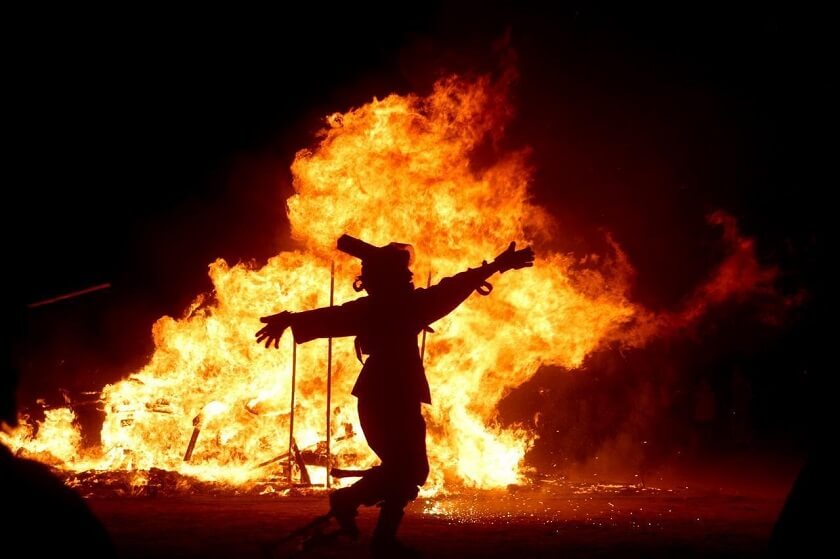 Charshanbeh Soori is known for the glowing light and warmth of the fire. As it is a celebration to be held mainly outside the houses, people would gather together and put some firewood, bushes or dead leaves on fire and arrange them in a line of either three, five or seven small bushes of fire. The fire would keep them warm and also keep the night bright. As people gather around these small bushes of fire and chat, dance and have fun, they would line up and jump from one bush to the other while singing to the fire “You get your red glow from me and I get my yellow glow from you”.

Because the fire would go stronger and stronger as more bushes would be added to it and also people would run around them and jump from them and the wind would make the fire go red and strong, and the light of the fire on people’s faces would create a yellow glow.

You must be wondering why people do that. It is believed that it is either because of the long-held belief that if they do so they will be immune from the bad fortune and diseases in the upcoming year, or more strongly it is believed that fire was recognized as one of the purifying elements by ancient Iranians and when they were getting ready to welcome the New Year they would clean up their houses and wear new clothes, and in Charshanbeh Soori they would set fire to old things they had to get rid of them and purify everything. Thus with the passage of time, although different ways of cleaning and purifying are at hand today, people still see it as a chance to purify everything, get rid of the old and rusty things and start the new year fresh and healthy mentally and physically.

In some cities like Naeen, Khor-e-Bianak, and Urmia they fires would be set on rooftops or on hills. It is widely believed that this was to take care of the ground as the people would be farmers and they respected the ground that gave them life. In Tabriz, the bazaars would be decorated with candles and beautiful lamps, and people will go to the bazaars and buy new jugs and a mirror as a sign to double happiness and joy in the upcoming New Year.

The Ritual of Breaking a Jug, a Common Act of Getting Rid of the Old Unhealthy Traits 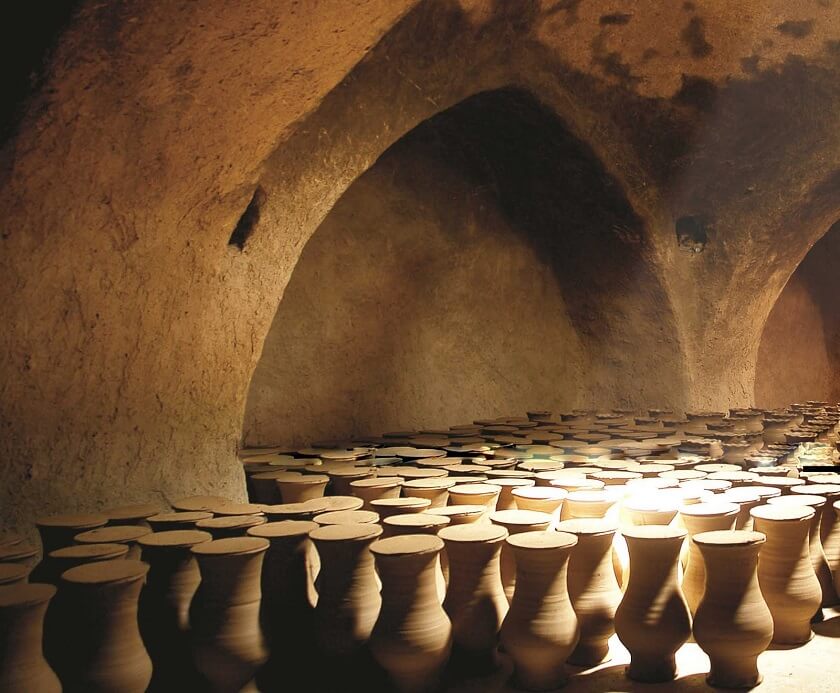 Charshanbeh Soori is a celebration and a ceremonial ritual that dates back to thousands of years before. It can be said that its main rituals are still the same as it was first done. In the old days, each family would have a big jug, usually potsherd, which they used as their main source for keeping water cool and clean throughout the year. On the night of Charshanbeh Soori, the officials would make everyone aware of the time of this ritual, breaking the jug or Koozh Shekani in Persian, by the sound of kettledrums and everyone would go on rooftops and throw the jug on the ground and break them. It was never a dangerous act as the houses would not be that tall and everyone would be aware of the time of breaking the jugs, and they would make sure no one gets hurt.

This way by breaking the jugs, they made sure they are not going to use the old jugs and it was eventually really good for their health, and by buying new jugs the cycle of work in bazaars would still be flourishing for those who made them. Also, it was a common act done by all the people and it had a psychological effect, as they would hear the sound of the jugs being broken and feel that the old things are over and it is time to start afresh. 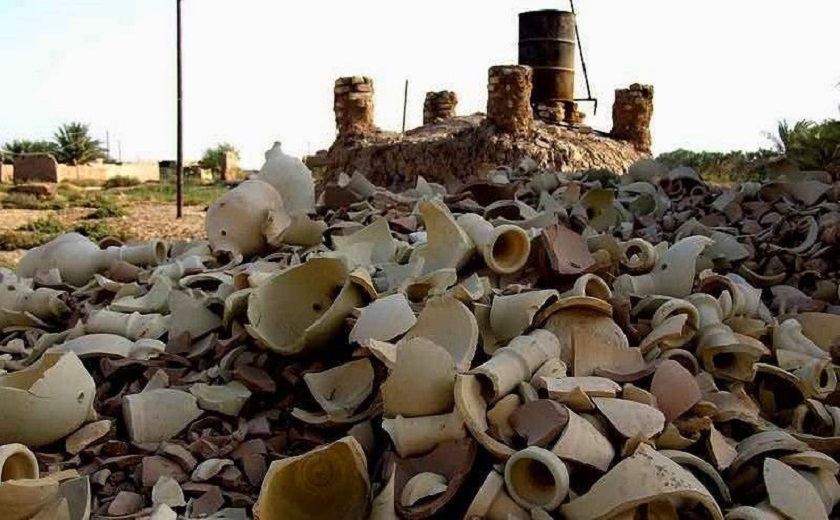 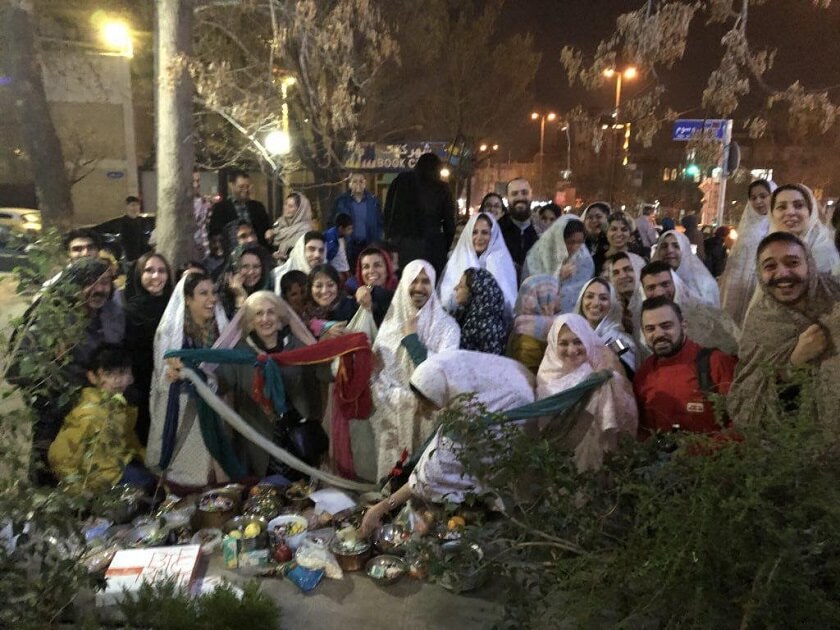 There is a story behind the ritual of Ghashogh Zani, which literally means making noises with a spoon. Ancient Iranians believed that the place to which all the spirits go after death would be emptied once a year starting from Charshanbeh Soori, and these spirits would come and visit their family members and friends but in a special way. It was believed that they would cover their faces and as they cannot use a verbal way to communicate they would make noises with a small bowl and a spoon. Iranians always respect and glorify their passed away family members, their elders, and their ancestors. So the young boys and girls would cover their faces with a veil, hold a small bowl and a spoon and go to their neighbors’, families’ and friends’ houses and knock on their doors. People in the houses would put nuts, chocolates, sweets and sometimes coins in their bowls and the youngsters would go to other houses. This way they made sure that if the spirit of their gone loved ones is among the youngsters at their door, they have given them their food and affection, showing them that they are together remembering them and sharing their night with them.

One of the almost forgotten traditions of Charshanbeh Soori is FaalGoosh which means to eavesdrop and Gereh Goshai which means problem-solving. In the old days, people and mostly young girls would ask for what they wished for and a solution for their problems silently in their minds and hearts. Then they would go to the alleys and hide in a corner to eavesdrop on what the people who passed the alley would say. They later would interpret what they have heard to find the answer they were looking for.

As a result, people would make sure they say nice things and hopeful and positive comments on the night of Charshanbeh Soori to give hope to others. As I said earlier, Charshanbeh Soori was not just a celebration, but a purification for the heart and the souls of people. 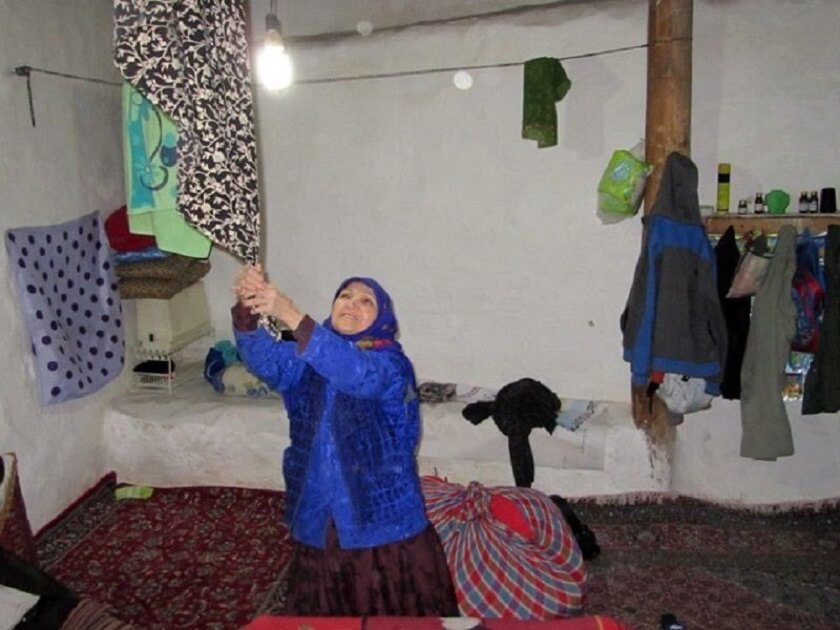 The ritual of Shaal Andazi is very similar to Ghashogh Zani. It was mostly done in cities like Hamedan and Zanjan. In the old days where houses used to have chimneys and staircases, the youngsters would make a long rope by knitting several colorful scarves together. Then they would go on the rooftops and make the owner of the house aware of their presence in a way like coughing or a loud tap of the foot, and then throw their long rope down the staircase or the chimney. The people in the house would place some things in the last scarf and tie it, and pull it once strongly to indicate that they have given something back, and the youngsters would retrieve their rope and interpret the upcoming year by what they found in the tied last scarf. If they find bread in the scarf it means that their year will be full of blessings. If there are sweets in it their year would be full of happiness. If they find pomegranates in it they are most likely going to have lots of children in the future and walnut would mean they are going to have a long life. Almond and hazelnut would mean endurance and patience when facing difficulties. Raisins would mean a blessed year and silver coins would be a sign of a happy married life. It was believed that Shaal Andazi was an indirect way of proposing to the girl of the house, and what was found in the scarf would show the answer of the bride. 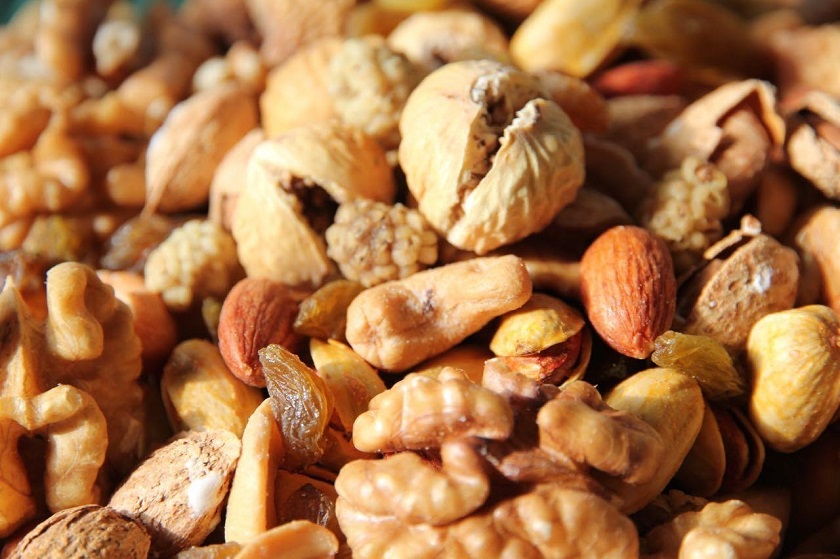 There is no special food on this night, but in Shiraz people would make Ash-e-Reshteh. Ash-e-Reshteh is an Iranian stew filled with special noodles and all kinds of beans and grains.

What is commonly eaten in Charshanbeh Soori is a special mixture of nuts, called “the problem-solving nuts”.

After putting off the fire people would gather in the houses and tell tales and read poems, roast the remains of the nuts they had already gathered for winter on fire and add salt to it, to make it more delicious and also to purify it, and then they would eat them together. In the older days, it was believed that by doing so they would be kinder to one another in the upcoming year as they share something to eat and they chat in groups. So they would forget whatever grudges they may have had and put an end to it. 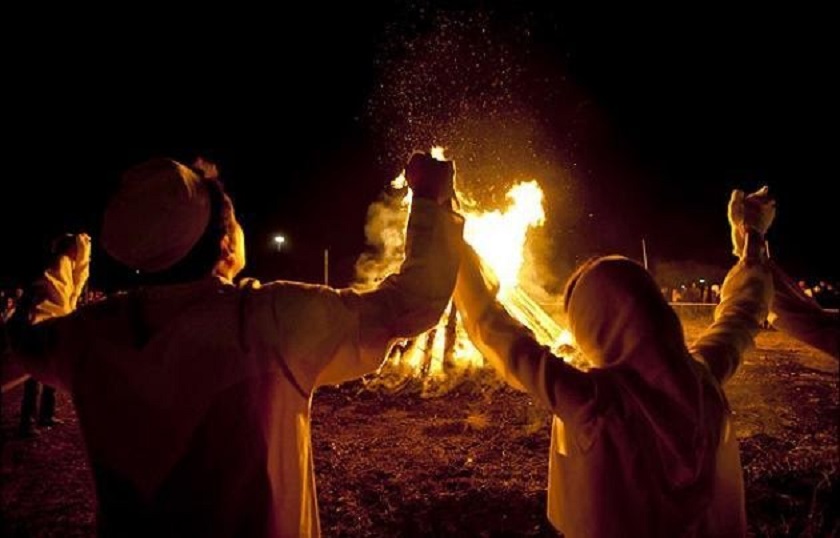 As one of the most important celebrations and rituals before Nowruz, Charshanbeh Soori is one of the fondest memories of any Iranian. It does not matter if they live in Iran or outside Iran in different countries, they still celebrate this ancient ritual. Still held by setting fires and gathering together, people celebrate a new start in their life by putting an end to the cold and gone.

Before Nowruz, Iranians clean their houses fully and make sure that everything is purified and renewed, as they want to start the New Year healthy and fresh. Charshanbeh Soori is somehow one of the steps of cleansing and purifying, but it also plays a major role in how people enter the New Year mentally and emotionally.

When families, friends and neighbors, people who live together in general gather together right before Nowruz and the beginning of a new year and a new chapter in their lives, when they chat and spend quality time together when they break the old jugs and relive the good memories, there is a chance to feel you are a part of a greater loving and caring whole, that you belong to a larger group of people who share your beliefs, your happy and sad moments. This would generally make people feel better about themselves and their life, and enable them to start a brighter year, to have a new chapter unfolding for you full of love and companionship. After all, this is Iran, the land of poetry, the land of tales, the land of love and celebration. 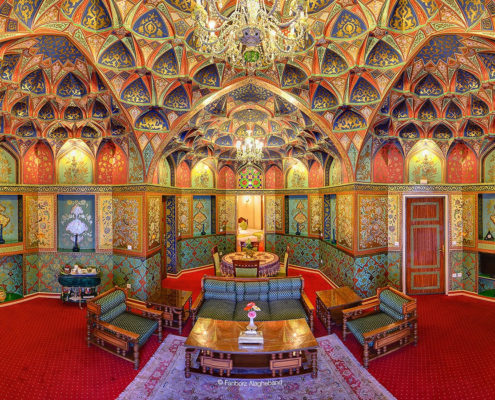 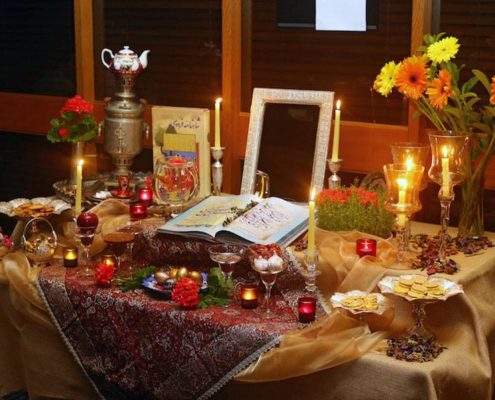 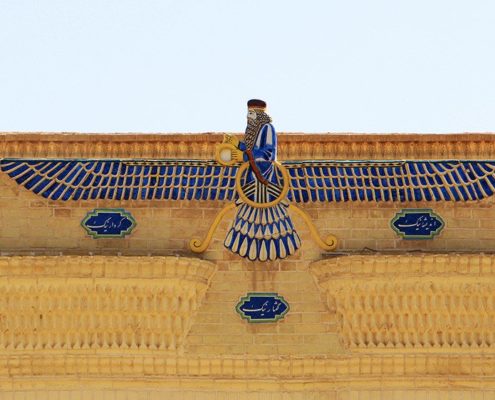 Iran’s Religious Sites: the Beauty of the Mosques

Old City of Yazd; A World Heritage
Scroll to top